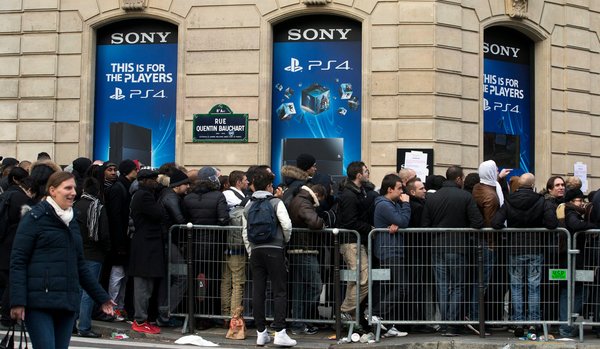 It might take a miracle from the North Pole for video game fans to get their wish this season.

New game consoles from Sony and Microsoft are sold out in many stores, with Sony's less expensive PlayStation 4 proving to be especially difficult for shoppers to find. The PlayStation 4 and Xbox One had stronger sales during their first two weeks on the market - more than two million each - than any previous game console, according to DFC Intelligence, a game research firm in San Diego.

Those strong sales are the latest and strongest evidence yet that the console business appears to be turning into a two-horse race, with Sony and Microsoft jockeying for the lead and Nintendo eventually falling to a distant third. Nintendo's Wii U has had meager sales since it was introduced last year, putting the company on its heels.

An overall surge in console sales was widely expected. Pent-up demand for the new Sony and Microsoft systems swelled among gamers, who were buoyed by the promise of more powerful hardware that could produce better game graphics and effects. But seeing the machines fly off the shelves has still cheered an industry that has slumped in recent years, as consoles aged and cheaper games on smartphones and tablets became more compelling.

Jonathan Sandler, a spokesman for the electronics chain Best Buy, said the Sony and Microsoft consoles had been hard to find in its stores at different times since they went on sale in November. The retailer said it had 'limited quantities' of PlayStation 4s for sale on Sunday, while the Xbox One was available in Best Buy stores and on its website.

'We're completely sold out,' Chad Taylor, a product manager at Abt Electronics, a large electronics store in Glenview, Ill., said of the new Sony and Microsoft consoles. 'As fast as they get here, they go out. We get phone calls nonstop.'

Nathaniel Rosario, a tech support analyst at Verizon Wireless in Rochester, is one of the many frustrated gamers who took to Twitter to vent his frustration over his inability to find a PlayStation 4. He said he could not find the system at Best Buy or other stores and refused to pay the huge markups people were asking on Craigslist for the console.

'I still can't find one, so I was thinking I might just have to wait a month or two,' Mr. Rosario, 25, said in an email exchange. 'Should have preordered.'

Consoles are almost always scarce when they are first released, in part because of production constraints. The real test of the staying power of the new products will come next year.

But the sales of the Wii U have been weak this year. Barring an unexpected reversal in the momentum of its rivals and a change in sentiment about its own product, Nintendo's position in the console market looks as if it will become increasingly marginal.

'It has been really amazing how disappointing it has been,' David Cole, an analyst at DFC Intelligence, said of the reception to the Wii U.

The surprise of the industry over Nintendo's situation stems partly from the company's sensational winning streak in the mid-2000s, when its Nintendo DS hand-held system and Wii console became enormous hits through clever product designs that made them appealing to a broad audience.

Sales of those products faded, though, as games on mobile tablets and smartphones began to take off later in the decade and more powerful consoles from Microsoft and Sony picked up steam. The Wii U, which comes with a tabletlike touch screen controller, did not provide Nintendo with a much hoped-for revival.

Unit sales of the Wii U were up 340 percent in the United States in November compared with October, according to the NPD Group, a market research firm. To get that bump, though, Nintendo had to cut the price on the system much earlier than it did for the Wii. And even after the bump, unit sales of the system remain low relative to the competition's, according to analysts.

Michael Pachter, an analyst at Wedbush Securities, predicted that Nintendo would have about 10 percent of the console market with the Wii U, down from about 40 percent with the Wii. Sony and Microsoft, he said, would each taking a bigger share than they did with the last generation of hardware.

In a recent interview, Reggie Fils-Aime, the president of Nintendo's United States division, said he expected sales of the Wii U to improve as better games for the device went on sale. 'Our business is doing just fine, thank you very much, despite the competitive launches,' he said.

Nintendo has hit creative ruts before. More than a decade ago, it looked like it was hurtling toward irrelevance when its GameCube console fizzled. But Nintendo, which began making card games in Japan in the late 19th century, innovated its way out of that predicament with the Wii, and game industry executives believe it can do so again.

'They clearly need to take a real hard look at themselves and what they did,' said Mr. Cole of DFC Intelligence.