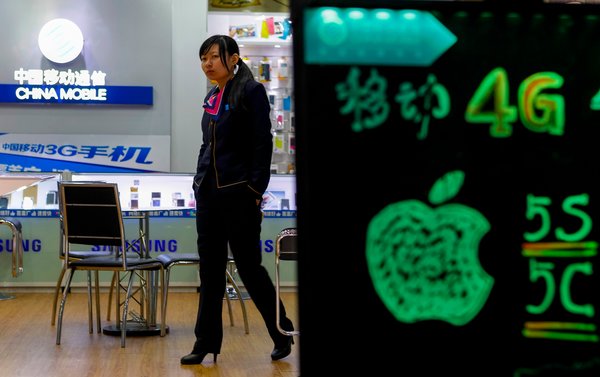 Just about any way you slice it, 763 million customers is a huge potential pie.

On Sunday, Apple and China Mobile announced a deal to bring the iPhone to the Chinese carrier, the largest wireless network in the world, on Jan. 17.

An agreement with China Mobile could, at least initially, give Apple a big lift into the vast Chinese market, analysts say, increasing its worldwide sales.

' China is an extremely important market for Apple and our partnership with China Mobile presents us the opportunity to bring iPhone to the customers of the world's largest network,' Timothy D. Cook, Apple's chief executive, said in a statement.

But the company will face many challenges in capturing the Chinese market.

While Apple's smartphones are dominant in the United States and a major player in Europe, the company has struggled to gain much traction in China, where phones using Google's Android operating system dominate for several reasons, particularly price.

In China, some smartphone makers, like Huawei, Coolpad and ZTE, offer Android phones for less than $100, while Apple lists the iPhone 5C at $739, and the 5S at $871. Apple said that it would reveal pricing of the iPhones for China Mobile customers on a later date.

Apple is the No. 5 smartphone player in the country, behind Samsung and the Chinese handset makers Huawei, Lenovo and Yulong.

The slow sales of the iPhone in China are reflected in the overall shrinkage of the company's share of the global smartphone market - to 12.1 percent in the third quarter, down from 14.3 percent in the same period a year ago, according to the market research firm Gartner. Meanwhile, Lenovo, the No. 3 player, which sells the vast majority of its smartphones in China, had 5.1 percent of the global market in the third quarter, from 4.1 percent a year ago. Samsung's global share remained flat at 32.1 percent.

Still, analysts were optimistic that Apple would sell a lot of phones through China Mobile, though they offered wide-ranging estimates for how many more. William V. Power, an analyst for Robert W. Baird, said Apple could sell as many as 30 million more iPhones in 2014, while Toni Sacconaghi, an analyst for Sanford C. Bernstein research, offered a more conservative estimate of 15 million iPhones.

Apple has long pursued a deal with China Mobile. The carrier showed signs of warming up to Apple only after it began losing customers to competitors that offered the iPhone. The second- and third-largest carriers in the country, China Unicom and China Telecom, have had longstanding arrangements with Apple, but they are much smaller than China Mobile.

In addition to cost, another reason Android phones have proved so popular in China is that, unlike in the rest of the world, there is a wider variety of mobile applications for Android phones than for iPhones. While the Google Play store is not officially available in China, Android users can turn to dozens of alternative app stores offering licensed and pirated applications.

Analysts expect the vast majority of smartphone growth in China to occur at the lower end of the market, as the phones become more widely available to lower-income consumers in smaller cities and rural areas. Those consumers will presumably be more attracted to the lower-cost Android phones.

Also, in China fewer handsets are subsidized by mobile carriers than in the United States, Europe or Japan. More than two-thirds of Chinese phones are sold unsubsidized by third-party retailers, often over the Internet.

Chinese operators are reluctant to subsidize phones too heavily in a market where many customers are happy with smartphones that cost under $100. Both China Unicom and China Telecom have been cutting back on subsidies.

Apple surprised some analysts in September with its aggressive pricing of the iPhone 5C, which has fewer features and costs less than the 5S, though the two were introduced on the same day. The company had been expected to try to appeal to Chinese customers with the lower price, but the 5C was introduced at a level that remains high in China.

Analysts say Apple may have to cut the price further, or introduce another, less expensive model if it hopes to broaden its appeal in China.

The cost-consciousness of Chinese consumers extends to their choice of mobile networks. Only 176 million China Mobile customers, less than a quarter of the total, subscribe to the company's high-speed wireless data service, using 3G technology.

Apple and China Mobile announced their partnership a few days after China Mobile introduced an upgrade to a newer, faster system - 4G - for parts of its network. The existing 3G subscribers, not the overall customer base, will provide the main target audience for the new phones and services.

The deal with China Mobile has been rumored for a while, and potential customers for the iPhone are already lining up. Among them is Wang Xiaocong, who works in the marketing department of a law firm in Beijing. Ms. Wang, 31, said she had a BlackBerry for work and a Samsung smartphone for personal use, but was looking for something different.

'I am not a big fan of high-tech products,' Ms. Wang said. 'But I would love to have an iPhone next time, with the 4G network, maybe next year. It looks very fashionable.'