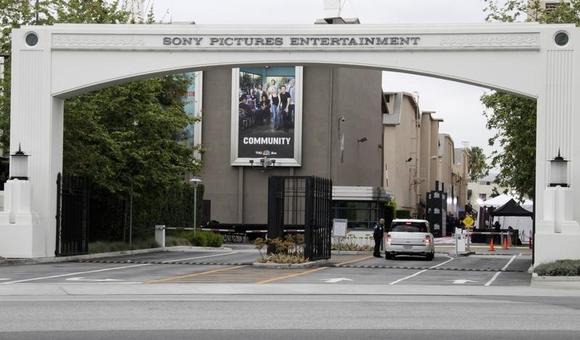 The attack occurred a month before Sony Pictures, a unit of Sony Corp, is to release 'The Interview.' The movie is a comedy about two journalists who are recruited by the CIA to assassinate North Korean leader Kim Jong Un. The Pyongyang government denounced the film as 'undisguised sponsoring of terrorism, as well as an act of war' in a letter to U.N. Secretary-General Ban Ki-moon in June.

Representatives of the North Korean mission to the United Nations could not immediately be reached for comment on Saturday.

Sony Pictures' computer system went down on Monday. Before screens went dark, they displayed a red skull and the phrase 'Hacked By #GOP,' which reportedly stands for Guardians of Peace, the Los Angeles Times said.

The hackers also warned they would release 'secrets' stolen from the Sony servers, the Times reported.

Re/code said in a report late Friday that Sony and security consultants were investigating the possibility that someone acting on behalf of North Korea, possibly from China, was responsible. Re/code said a link to North Korea had not been confirmed but it had not been ruled out.

A source familiar with the matter told Reuters that Sony Pictures was investigating every possibility, adding no link to North Korea has been uncovered.

Sony acknowledged the computer outage in a statement on Tuesday. Emails to Sony were bouncing back on Saturday with a message asking senders to contact employees by telephone because its email system was 'experiencing a disruption.'

'The Interview,' scheduled for release in the United States on Dec. 25, stars James Franco as the host of a tabloid television show that is enjoyed by Kim, and Seth Rogen as the show's producer. When they are granted a rare interview with Kim, the CIA wants to turn them into assassins.

KCNA, the official news agency in isolationist North Korea, quoted a Foreign Ministry spokesman in June as promising a 'merciless counter-measure' if the film is released. The government also wrote to U.S. President Barack Obama asking him to stop it, the Voice of America reported.