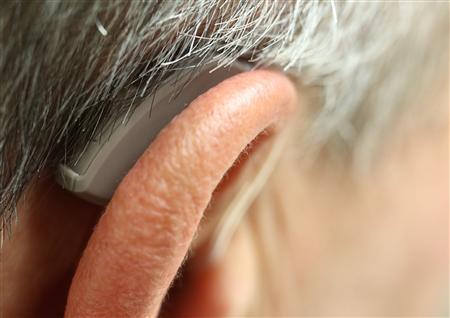 1 of 6. An employee of GN, the world's fourth largest maker of hearing aids, demonstrates the use of ReSound LiNX in Vienna November 22, 2013.

GN Store Nord, headquartered in Ballerup, near Copenhagen, has a product it hopes will reach that demographic - famously averse to accepting the depredations of age - by taking the stigma out of wearing an aid.

The world's fourth-largest maker has collaborated with Apple Inc to develop a device packed with bluetooth-like technology that installed in the ear allows users to stream voice and music from their iPhones without the need for an intermediary device.

Denmark's expertise in sound technology can be traced back to 1904, when William Demant Holding Group was founded by Hans Demant, whose wife had a hearing disability. Nearly 110 years later, William Demant is the world's second-largest maker of hearing aids, behind Switzerland's Sonova, and its Oticon Foundation continues to fund research and support engineering students.

Strong public and private cooperation has driven development in audio products from microphones to amplifiers in Denmark, which is also home to luxury stereo maker Bang & Olufsen and sound measurement firm Brüel and Kjaer.

Denmark's technical university offers an engineering acoustics masters program that attracts students from around the world and hosts a sound technology innovation network funded by the Danish Agency for Science, Technology and Innovation.

There is huge potential in an industry worth $15 billion.

The World Health Organization estimates there are 360 million people - over 5 percent of the world's population - with a disabling loss of hearing, yet current hearing aid production meets less than 10 percent of global need.

Berenberg Bank estimates only one in four who suffer from hearing loss in the United States use them. That might in part be down to stigma, part to cost.

Premium products in the United States sell for about $3,000, including GN's Verso range, and GN has said it will probably launch LiNX at a 5 to 10 percent premium to that.

But there are hopes that the new technology can overcome some of the stigma by making the devices more attractive, accelerating single-digit volume growth in a market that will benefit from an ageing population and rising wealth in emerging markets.

United Nations figures project that one in five people in a world population of between 8.3 and 10.9 billion will be over 60 by 2050, up from just under one in 10 of the current 7 billion.

It was a technical challenge to get the 2.4 GHz technology used in the LiNX into a tiny, discreet hearing aid that could run for several days without frequent and fiddly battery changes.

It had a headstart on bluetooth technology for hearing aids as one of the world's biggest wireless headset makers, but conventional bluetooth devices tend to be notoriously profligate users of energy and require sizeable antennas. Overcoming those limitations gives LiNX users a cosmetic advantage by eliminating the need for a separate transmitter, typically worn round the neck.

Morgan Stanley calls the LiNX, which will be officially launched in the first quarter next year, the 'first attempt to turn a hearing aid into more of a lifestyle product'.

Lars Viksmoen, CEO for GN's ReSound hearing aid business, described the 2010 launch of its first 2.4 GHz product - with a third device for streaming - as a 'live or die' moment.

'Had that launch failed, we perhaps wouldn't have been here today,' he said.

Luckily, the 2.4 GHz frequency was picked last year by trend-setter Apple for its iPhones.

Apple went to all manufacturers and said it wanted to have a direct link from hearing aids to its phones using 2.4 GHz and, because GN was already on its second generation of such products, an instant pairing was made.

Frequent visits followed between California and Copenhagen to build up the protocol and improve power-efficiency.

The buzz surrounding the made-for-iPhone device and a major cost-cutting program have helped send GN's share price up 60 percent this year, beating the 27 percent rise in Sonova and the 6 percent rise in William Demant.

Some remain skeptical that the main user base - the over 65s - will feel the need for the connectivity offered.

'I think it will provide new avenues for innovation ... but I am less convinced it will structurally change the industry,' said Tom Jones, a Berenberg analyst.

William Demant, which has a 23 percent market share, will not go into details but says there is greater engagement with the mobile phone industry.

'We will have great stuff with connectivity for all types of mobile phones,' Finn Mohring, Vice President of Research and Development at William Demant, who previously worked at Nokia for nearly two decades, told Reuters.

Asked if it might also collaborate with mobile makers, he said: 'Probably. We will not be seen trailing in the dust on this area.'

William Demant, Sonova, Germany's Siemens and privately owned Widex in Denmark all use lower frequency bands which some argue provide better sound quality. They also have 2.4 GHz in third devices, but not in their hearing aids.

Starkey Technologies in the United States uses an 800-900 MHz platform. It is working on a made-for-iPhone hearing aid but will not provide details about what technology it will use.

But most agree GN is a step ahead, and ReSound's Viksmoen said it would look to work with other mobile phone makers - the bigger Android market, for instance - after the iPhone device.

'It's a no brainer that we will not stop here,' he said.

Morgan Stanley recently bumped up its organic sales growth forecast for GN's hearing aids business for 2014 to 8-9 percent from 5.8 percent, with possible further upside thanks to LiNX.

Currently the penetration rate among iPhone users in GN's target group is only 5 to 10 percent.

'We'll see if connectivity can change that,' Viksmoen said.

(Editing by Will Waterman)