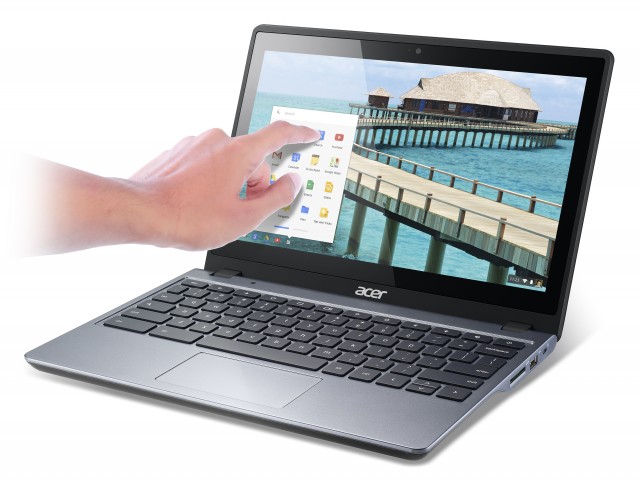 When we reviewed the $249 version of Acer's C720 Chromebook last month, we came away impressed by the performance and the battery life, but it was still a very no frills laptop. Today, Acer has announced a frill: a new $299 version of the Chromebook with an integrated touchscreen. The Acer C720P is the second Chromebook to feature touch (after the Chromebook Pixel), and it's the first budget-friendly version of the laptop to do so.

Since the C720P ships with the same Haswell-based Intel Celeron 2955U as its non-touch counterpart, the performance and battery life should remain intact. However, there are differences aside from the touchscreen-the SSD has been upgraded from 16GB to 32GB, and the glass layer that enables touch and protects the screen also gives it a reflective glossy finish rather than a matte one. The RAM has been halved from 4GB to 2GB-while Chrome OS is light enough that many users won't notice the difference, heavy multitaskers or people with lots of tabs open may notice a drop in performance. Additionally, this RAM is soldered to the system's motherboard, so you'll have no opportunity to upgrade later on.

Earlier this month, Acer also announced a cheaper $199 version of the C720. The only difference between it and the $249 model we reviewed is RAM-the cheaper version has 2GB, while the more expensive model has 4GB. The C720P will be available in early December from Amazon.com, Best Buy, and Acer's Web store.