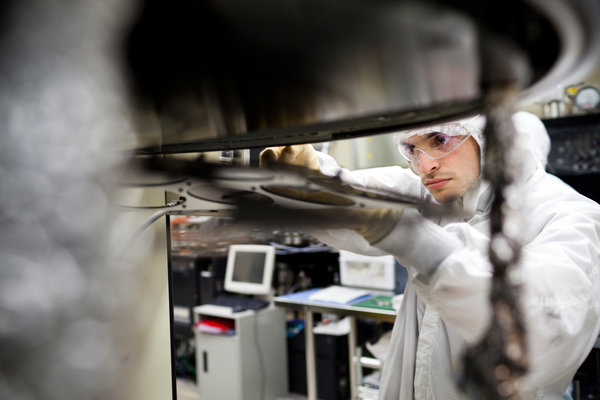 PALO ALTO, Calif. - A group of Stanford researchers has moved a step closer to answering the question of what happens when silicon, the standard material in today's microelectronic circuits, reaches its fundamental limits for use in increasingly small transistors.

In a paper in the journal Nature on Wednesday, the researchers reported that they had successfully built a working computer - albeit an extremely simple one - entirely from transistors fashioned from carbon nanotubes. The nanotubes, which are cylinder-shaped molecules, have long held the promise of allowing smaller, faster and lower-powered computing, though they have proved difficult to work with.

The Stanford Robust Systems Group, however, has made significant progress in the last 18 months, advancing from building individual carbon nanotube transistors to simple electronic circuits made by interconnecting the transistors, and this week to a complete computer made from an ensemble of just 142 low-power transistors.

While Stanford's prototype computer is assembled from transistors that are gargantuan by industry standards - one micron vs. 22 nanometers - it is what computer scientists refer to as a 'Turing complete' machine, meaning that it is capable of performing any computation, given enough time.

'It can run two programs concurrently, a counting program and a sorting program,' said H. S. Philip Wong, a Stanford University electrical engineer, and one of the leaders of the group. 'We've spent a tremendous amount of time on this; in fact we've spent two generations of students on this.'

The computer is based on a subset of 20 of the instructions used by the commercial MIPS microprocessor, which itself was designed by a group of Stanford researchers led by Stanford's current president, John Hennessy, during the 1980s.

'I think this is a really nice piece of work,' said Supratik Guha, director of physical sciences at I.B.M.'s Thomas J. Watson Research Center. 'It's a rudimentary demonstration that carbon nanotubes can be used to build a universal computer, or a Turing-complete machine. This is not the most efficient computer, but that wasn't the point. It's one of the first steps.'

Because the factory processes that underlie the modern semiconductor industry require such painstaking precision, any new technology that the industry might use must be perfected more than three years before it can be considered for use in commercial production.

Carbon nanotubes have continued to excite the material science field because of their proliferating array of allotropes - different forms of the material - all with potential. Dr. Guha complimented the Stanford group for maintaining its focus on a single engineering advance.

Currently, semiconductor industry leaders can make integrated silicon circuits with a feature size of 22 nanometers, roughly 4,000 of which could be spread across the width of a human hair. With the arrival of a new generation of smaller transistors roughly every two years, the industry generally believes that silicon will be scaled down to a limit of 5-nanometer transistors sometime after 2020.

The constant shrinking of transistor size over the last half-century has been important because it has significantly lowered the cost of computing, making it possible to build ever more powerful computers that are faster and cheaper, and consume less power with each generation.

While Intel has been generally circumspect about what material technology it plans to turn to when silicon ceases to 'scale' down to smaller transistor sizes, I.B.M. has been more vocal and optimistic about the potential for carbon nanotubes.

The company has recently succeeded in creating an inverter, a basic logic element used in electronic circuits, using two different types of carbon nanotube transistors, and plans to demonstrate the device at a technical meeting at the end of the year.

The researchers said that their advance was not a scientific breakthrough, but it was a significant demonstration of the ability to work with a material other than silicon with great precision.

They also stressed that their research project was entirely compatible with industry-standard manufacturing processes based on silicon. This suggests that in the future it will be possible to build hybrid chips using carbon nanotubes at particular locations, and thus extend the life of silicon in computing.

The researchers said they were proud of their tiny prototype.

'This is a general computer and we can do anything with it,' said Max Shulaker, a Stanford graduate student who is a leading member of the research group. 'We could in principle run 64-bit Windows, but it would take millions of years.'