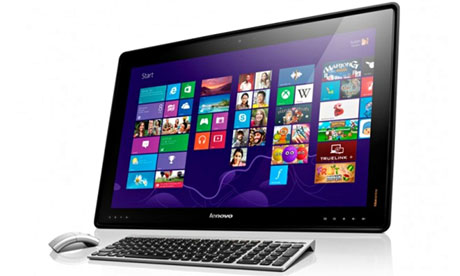 The collapse of the PC business is accelerating. Worldwide shipments fell by more than 10% year on year in the second quarter, recording an unprecedented fifth successive period of decline as the market undergoes a fundamental shift towards tablets, smartphones and touch devices.

China's Lenovo emerged as the top seller according to separate data from research companies IDC and Gartner - though even it saw a year-on-year fall in total sales.

But amid a market where Taiwan's Acer and Asus saw shipments crash by more than 30% and 20% respectively, Lenovo's emergence at the top over long-time leader HP, the American PC maker and technology company, marked a figurative passing of the torch. Its principal market was China, which represented more than 50% of its 12.7m shipments. 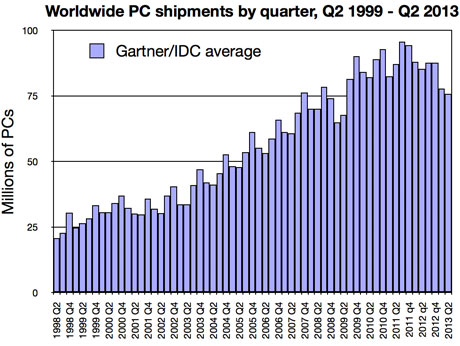 All regions saw a fall in PC shipments compared with the year-ago period - suggesting that economic factors are not the key ones.

'We are seeing the PC market reduction directly tied to the shrinking installed base of PCs, as inexpensive tablets displace the low-end machines used primarily for consumption in mature and developed markets,' said Mikako Kitagawa, principal analyst at Gartner. 'In emerging markets, inexpensive tablets have become the first computing device for many people, who at best are deferring the purchase of a PC. This is also accounting for the collapse of the mini notebook market.'

The fall suggests that not only is the marketing shrinking, but that the shrinkage is accelerating. The year-ago period, just ahead of the launch of Windows 8, saw an expected slowdown of 2% as PC OEMs and businesses paused while they waited for new products and new software from Microsoft.

But Windows 8 has not proved to be the hoped-for shot in the arm for the PC business, which has been losing attention as consumers - who make up half of purchasers - shift to buying tablets and smartphones. 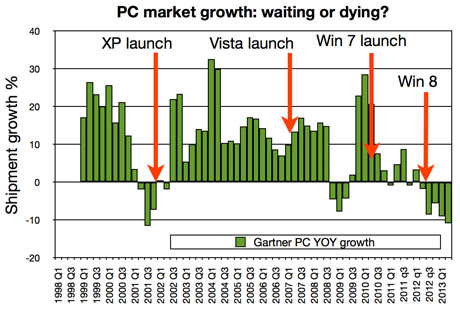 IDC forecast in May that tablets will outsell laptops this year, and that by the end of 2015 they will outsell the entire PC segment.

The only ray of hope is that the US market - where Apple emerged as a surprise third place, behind HP and Dell, despite shipping only 1.8m units there - is showing some signs that enterprises are beginning to shift from Windows XP, which is approaching the end of its support period 12 years after launch, to Windows 7.

As well as a rise in Dell's enterprise-focused PC business - crucial if the company is to survive its shift to a private entity - Bob O'Donnell of IDC said: 'We're also starting to see more stabilisation in shipments [in the US], which we think is a reflection of PC lifetimes finally starting to even out after a long period of gradual increase. The end result should be more PC replacements, even if consumers and companies are selective in making replacements and wait until PCs are older before replacing them.'