May 03, 2013
SAMSUNG makes bold promises with its new flagship phone, the Galaxy S4. 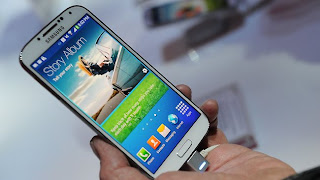 It promises a bigger screen in a smaller shell; a more powerful, capable camera; longer battery life and a more premium feel while retaining a plastic cover.
The software claims are bolder still. This smartphone will allegedly track your eyes, your hands, your steps and the humidity around you, translate foreign languages and pause videos if you get distracted.
The S4 even claims to have eyes in the back of its head - taking photos with two cameras at once - and will allow you to yell at your alarm to shut it up.
Switched On put these claims to the test.
The Galaxy S4 doesn't look dramatically different from the S3, though it feels like a more solid, premium creation. Its silver sides are almost indistinguishable from metal, the polycarbonate shell fits more snugly and the bezel beside the screen is thinner than ever.
Start of sidebar. Skip to end of sidebar.
End of sidebar. Return to start of sidebar.

This is how Samsung squeezed a 5-inch screen into a 7.9mm thin, 130g phone that fits in your pocket.
The S4's screen is more than just bigger; the full high-definition, Super AMOLED display is brighter and sharper than the S3.
Resolution has jumped to 441 pixels per inch, making text much easier to read, and colours now look more realistic and less over-saturated. At first glance, the display appears to be printed on to the phone.
Many of the S4's selling points lie within, with plenty of software innovation.
While the megapixel boost would have been news in itself, Samsung has also added tools such as Dual Shot, Eraser, Drama Shot and Sound & Shot to its 13-megapixel camera.
Dual Shot uses the phone's two cameras at once - front and back - creating selfies which also show what's in front of you. The results look like postcards and could be handy for travel photos.
Eraser captures five photos consecutively and automatically detects and removes anything that moves from the finished photos. It's surprisingly accurate at identifying photo-bombers.
Drama Shot captures multiple photos of moving targets and overlays them on to one photo, much like a multiple exposure, while Sound & Shot captures background audio.
Other software enhancements include Smart Pause, which will stop video playback if you look away, and Air Gesture, which lets you scroll up and down web pages by waving a hand in front of the screen.
But Smart Scroll, which is meant to detect your gaze and move websites according to the angle of your head or the device, sadly, does not work as well. It was unreliable and buggy in our tests.
The S Health hub uses the handset's new sensors to track steps, estimate calories burned, log food intake and judge your environmental comfort.
Samsung's new flagship phone has a 1.9GHz quad-core processor, 2GB RAM running Android Jelly Bean software (4.2.2) and 16GB storage. Combined with a 4G mobile connection, this phone is one of the fastest available. The speed difference is noticeable.
Disappointingly, Samsung won't bring the more powerful octo-core chip or its 32GB and 64GB models to Australia, though there is a case that apps aren't ready yet for that sort of power.
Read more here_perthnow.com
features galaxy galaxy tab samsung