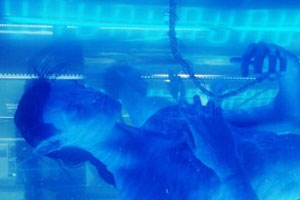 A Russian billionaire has unveiled plans to make humans immortal by converting them into 'Terminator-style' cyborgs - a creature that's part human and part machine - within the next three decades.
Thirty two-year-old mogul, Dmitry Itskov has been pushing the project forward since 2011 when he founded the 2045 Initiative.
His ultimate goal is to transfer a person's mind or consciousness from a living brain into a machine with that its personality and memories intact, according to website Digital Trends.
The so called 'Cyborg' will have no physical form, and exist in a network similar to the Internet and be able to travel at the speed of light all over the Earth, or even into the space.
Itskov's first highly ambitious goal, called Avatar A, involves a person controlling a robotic human replica through a brain-machine interface (BMI), a technology that already exists.
The deadline for this first stage is set for 2020, 'The Mashable' reported.
The Avatar B, due in 2025, would involve transplanting a human brain into an artificial body "at the end of one's life."
Next in line is the Avatar C, that rolls around in 2035, that would also involve a human-machine brain transplant, but with all personality intact.
Itskov hopes the Initiative will have learned enough about the human mind to free it completely from physical form finally, by 2045.
According to the report, from the Internet-like hive mind, individual personalities could manifest themselves as holograms when they need to interact with their environment.