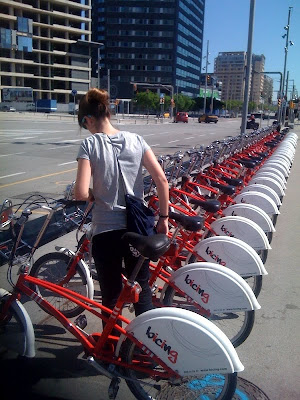 As we wander the beautiful city of Barcelona in our off hours from EAGE, we can't help but notice amazing examples of creative energy at work. The Europeans have always excelled at mass transit, and the primary mode of transportation around European inner-cities is via bicycle. In fact, Europe has one of the oldest and most mature biking cultures in the world.

This love of bikes has given way to mass biking services offered in many
major European capitals. Bicing is the alternative public transportation in Barcelona, launched in March of 2007 with 200 bicycles to rent and 14 stations spread around the city. The purpose of the system is to cover the short everyday journeys made within the City via bicycle, reducing the city's carbon footprint. As of May 2009 there were 6,000 bikes and 401 stations.

Each bright red Bicing SmartBike is a three geared bicycle made of stainless steel and aluminum, weighing around 16.5 kg, equipped with headlights, back lights and a RFID tracking system. The SmartBikes were specially designed to be easily recognizable and to prevent theft of parts or of the whole bike. Vans redistribute Bicing SmartBikes between the stations as needed.

The idea is to use the bikes to easily maneuver around the City without
having to rely on cars, buses or taxis. An annual membership of €30 ($36.93) is required, with most stations located near entrances of public
transportation like the metro, public parking lots and train stations. The
yearly fee allows members to use their RFID card to rent a Bicing SmartBike for up to two hours a day. The first 30 minutes are free of charge. A fee of €.50 ($.62) is charged for every additional half hour. After two hours a penalty of €3 ($3.70) an hour is charged, encouraging short-term use. If a user does not return the bike to a station within 24 hours of rental a charge of €150 ($185) is levied.